Recently a comment on this blog by JenX67 got me thinking about the Boomer-Xer riff that’s been going on forever. You see, I’ve really lightened up on the Boomers over the last year, mostly because I work with a bunch of them that have been really cool to me. And they do the things I think most Xers want from their Boomer colleagues like teach you stuff and then encourage you to take things to the next level and then don’t get in your way.

I think there are some Boomers who have this idea that Xers are waiting for them to die so that the Xers can take over. Literally, that’s the phrase I’ve heard used - “waiting for us to die.” But the thing is, I don’t think most Xers want what Boomers have. I think Xers would like to keep what Boomers got right (like making it okay for professional women to do something other than be a teacher, secretary, or nurse) – but then dump the stuff they screwed up.

I read this article about writer Matt Bai who decided not to write a book about President Obama so that he could write a book about what the Boomers didn’t get right in politics. In the interview, Bai talks about Gary Hart and how he was a creative thinker, but he was flawed and therefore rejected by the Boomer establishment (we also saw this with Bill Clinton). Bai also said he wanted to write this book for Xers and future generations so that these problems could be addressed.

But the article was obviously edited by a Boomer with the “waiting for us to die” philosophy. The headline was “Bai to Boo Boomers in New Book.” I’m assuming that’s because if a Gen X writes a critical analysis of the Boomer legacy, it would mean he’s booing the Boomers. Whatever.

So it makes sense to me that a lot of my fellow Xers are fed up with this kind of thing. But I ask you to look for that Boomer in your life who doesn’t fall into the Boomer stereotype – because it will be those people who build the bridges to younger generations. It’s those people who realize that although we are not waiting around for them to die, they will eventually die. And the impact they have on the future begins with the impact they have on the Xers.

Last night my mom was over and a we were watching television. A commercial came on. As I watched it, I started laughing uncontrollably.

Mom didn't get it.

Since I have DVR going, I rewinded it.

Mom still didn't get it.

After the third time, I had to just explain it to her.

Generational issue? Probably not. But since she told me not to write about it on my blog...

It's not the kids who are rude

I got an email from Joel H. about an MSNBC article that name calls the children of Gen X. It got my attention, because the subject line was "You are a bad parent." Here's what he wrote:

And apparently, so am I. But besides that, I still enjoy your blog, even if we do have rude children. I think you should shred this woman for being
the piece of boomer trash that she is. To be fair, she does give GenY a little of the business towards the end of the article. Is it me, or are the boomers
more and more becoming the cranky old timer yelling at us to stay off their lawn? And this is one more example of them shaking their fist at us "darn
kids"? I look forward to your comments. Thanks! Joel"

So I decided I would chime in on this one, even if it's a little late. I think the article is full of crap, basically. And not only does it take a swipe at Xers as parents, but it also makes Boomers look like a bunch of douche bags.
And they're not.

Sure, my worst boss ever is a Boomer. But so is my best boss. And my second
best. And my third.The real conflict between Boomers and Xers is simply a difference in communications styles. Over the past 15 years or so, both groups have made a lot of strides in understanding each other better and working through those differences. But just when you think things are smoothing out, some idiot has to write an article like the one Joel refers to. And then those feelings from 15 years ago come back.

Most normal people, regardless of how old they are, know better than to verbially attack someone's kids. And anyone who was a kid in the 70s or 80s or 90s knows that old grouches always point the finger at kids and how the new generation just isn't as good as previous ones (I'm sure this is also true of kids in the 40s, 50s, 60s, etc - I just wasn't around to witness it.)

I'm sure the next article by Susan Gregory Thomas, the woman who wrote the scathing piece on today's kids, will be on how Xers are slackers, Millennials are willfully entitled, and that darn G.I. Generation won't just go to the "home" where they belong.

Yada yada yada - Do Xers have a secret language?

A lot of Gen Xers don't engage in discussions where the other person has the polar opposite opinion. They roll their eyes because they're pretty sure the conversation would be a waste of energy. And that in itself is a uniquely Xer thing to do. It's not read the same way by Boomers or Millennials who read it as 1) you agree with me or 2) you're totally disrespecting me. Neither which is true.

Get off my lawn: Will Gen Xers make good old people? 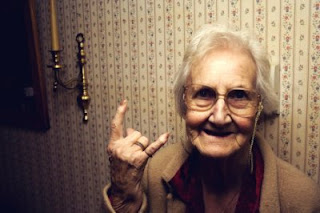 Getting old has been on my mind lately. Not so much that I'm worried about it, but I've been curious if I look my age, or older, or younger. I really have no idea. I've also noticed that my husband and I trade a lot of self-deprecating wise-cracks about how we're aging (i.e. gray hairs popping through, etc.) So it got me wondering if my lack of anxiety over aging is actually just a sign of my denial.
We all know by now that the Boomers refuse to age - even if they're bodies are fighting them on this one. But I've had this theory for a long time that Xers don't really care about getting old - they just don't want to lose their "coolness." And if you are an Xer like me who has lost her coolness, you convince yourself that knowing you're not cool is actually cool. Gen Xers like to think they're irreverent.
So I wonder what kind of old person I will be. I like to think my husband and I will be jamming to Motley Crue with our buddies in some senior complex that includes "Vista" in the title. But that doesn't mean I won't be yelling at you to get off my lawn, either.
Posted by GenXpert at 9:40 AM 3 comments: