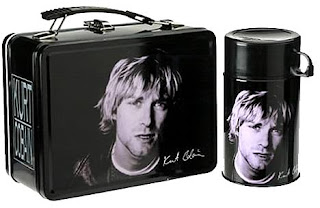 I am a huge fan of Jeff Gordinier, author of X Saves The World. We're even friends on Facebook and I got an email from him once. I love to show this YouTube clip of him talking about his book where he drops the F-bomb while talking about The Beatles when I'm doing presentations about Gen X. If I had more time, I'd probably be his cyber stalker.
He recently wrote this blog post where he second guesses himself for writing about Nirvana in his book. To this I say, you were not wrong, Jeff. I've read your book. In fact, I would even argue that it's extremely Gen X to deny that Nirvana was a Gen X band. We LOVED Nirvana when they first hit the college airwaves. They were cool. They were indie. If you knew about them, you were in on a secret. You were part of the cool dudes.
We stopped liking them when "the man" got a hold of them and started putting their faces on lunchboxes (even if it was only figuratively speaking).

good job - i love that - it's genx to deny it's genx. you're brilliant!

Hey are you a professional journalist? This article is very well written, as compared to most other blogs i saw today….
anyhow thanks for the good read!