Take down the beer tent and take my picture

Recently, a youth advisory board made up of high school-age Millennials in my community advocated for removing the beer tents from summer festivals in our town. They say it encourages drinking by minors - even though minors are not even allowed in the beer tents.

I thought of this idea while reading a Newsweek article that said that Millennials don't mind their lives being documented on film, especially in lieu of television shows like Laguna Beach. The article also said we really can't believe what we see on these reality television.

Well kids, what I want is my beer tent.

Why we love Sex and the City

Unless you have been shipwrecked on an deserted island, you know that Sex and the City will soon be released as a major motion picture. If you are a woman in your 30s and 40s, it may even feel like one of your best girl friends is coming home for a visit.

Sex and the City has lasting appeal among this demographic. One of the reasons is that the four characters offer a realistic depiction of the Gen X/Trailing edge boomer female mindset - even if they don't necessarily live realistic lives. The reason it's realistic is that the women in Sex and the City focus on what's really important - their lives. And they do it while wearing fabulous shoes.

Often, women this age are portrayed two ways: Stay at home moms or uber career women who only care about their jobs. These stereotypes may have held some merit with leading edge Boomers, but not trailing edge Boomers or Xers.

The New York Times said this movie is like the Super Bowl for women. I think in some ways, in the back of their minds, the Super Bowl allows men to live out a fantasy that they are jocks who play pro ball. And Sex and the City allows women to live out a fantasy where they have cool friends who go out with them every night and everyone gets to wear designer clothes - and everything comes in their size. Another similarity is that - in both cases - those watching don't mind being seriously marketed to for the privledge.

Is it a coincidence that Carrie Bradshaw wears Manolo Blahniks and uses and Apple computer?
Posted by GenXpert at 10:53 AM 3 comments:

A Message To Gen Y

Recently Ryan Healy, of whom I am a fan, wrote a post on www.employeeevolution.com called A Message To Gen X. When I read it, I thought, oooh Ryan is going to get quite the backlash on this one.

What I got from the article is that 1) Gen Xers think Gen Y is lazy 2) The workforce is catering to Gen Y because there are a lot of them, they are tech savvy, and they have teamwork, which is pissing off Gen X and 3) Gen Xers should just stop being so negative and let Gen Y make the workforce a better place. Okay, that may have kind of my spin on it. You may want to read it yourself.

Anyway, I didn't mind the article but I was surprised by it. Not by Ryan. By the Gen Xers. I really thought he'd get more flack. Then I realized something: Gen Xers don't fight back.

Here's the thing about Gen Xers: We don't think a well-crafted argument will change a person's mind once they've decided their opinion. You need to catch them before the opinion is formed. We weathered the 90s and learned to work with the Boomers. We did this by not arguing. Xers still do this. Listen to what your boss wants and then do what you want to do anyway. Most times, you can do this without the boss even knowing it. It's easier to ask forgiveness than permission.

So what's the result? I think the Gen Xers are quietly leading the workforce into the 21st Century. We're mentoring the oldest Millennials and parenting the youngest ones. Millennials may be the doers, but the Xers are the leaders.

So it really doesn't matter if the Millennials jump on the Babyboomer "Down with X" bandwagon. We're tough. We can take it.
Posted by GenXpert at 10:03 AM 7 comments:

Will Millennials Rock the Vote?

It's been said that the Millennial generation will have the potential to determine our next president. There are a lot of them - and they are civic minded. However, I couldn't help but ask myself, when push comes to shove, will they actually get to the polls on election day?

I wrote recently that my husband and I want to go to a retirement village when we are old, listen to some Motley Crue, and party with our friends. According to a new study, we may not have the money to do so.

Hopefully, we will be part of the 14% of Gen Xers who are cautious savers and will have the money to do so. Maybe we can find a retirement village with WiFi access so we can continue to telecommute between shuffleboard and potluck lunches.

Thank you to Laurie at Team Building Is For Suckers for the link.

By the way, if you haven't checked out Laurie's site, do so today. It lives up to it's title.
Posted by GenXpert at 4:59 PM 2 comments:

Nothing warms the heart of a Gen Xer like The Muppets

They can dish it out, but can they take it?

I'm a Gen Xer, so working with the generations that came before and after me can be a challenge. But I'm starting to think the Millennials can be the tougher students to deal with. Here's why: It often feels like the Millennials can dish it out the criticism, but they can't always take it.

"Teaching can be a humbling experience," a friend of mine emailed me recently. Boomers have high expectations of the instructor, but they are also sympathetic to how hard it is to teach. They want to "get it right" - and they will question you until you explain your points in a manner that they understand.

Millennials also have high expectations. But to them, the responsibility for their learning often is on the instructor. They don't do the "Let me make sure I understand this..." challenging like the Boomers. But in the end, if they don't have fun - or they don't get the grade they want - they get mad at the instructor. The Boomers get mad at themselves when they don't the grade they want.
Posted by GenXpert at 9:47 AM 2 comments:

GenerationXpert Suzanne Kart will facilitate a 1-day seminar Thursday in Neenah, Wisconsin on the topic of lifelong learning.
Posted by GenXpert at 9:17 AM 1 comment:

Ten Valedictorians and trophies for everyone: Why Millenials have a hard time sucking it up and moving on

When I was a kid I saw the movie Top Gun. There is a line in the film that has always stuck with me: There are no points for second place.

I think this is something that Boomers and Xers understand pretty well. That’s what we grew up with. Competition. There is only one winner.

In the workforce, that’s something you need to understand if you want to succeed. Otherwise, each time you aren’t the “winner” (the award winner, the one who is promoted, the one recognized at the meeting), it will eat at you. This is something Millenials struggle with.

A lot of writers misinterpret this fact. In fact, Millenials are often called narcissistic. I don’t think they’re narcissistic. I just think that they don’t always "get" that there is just one winner. They grew up their whole life all being “winners.” Everyone gets a trophy at the end of the season. And 10 people get to call themselves valedictorian.

I think the parents of Millenials did a good job of instilling self-esteem. However, they now need to learn that all results are not equal. And there are people who are better than you are. If you want to be the best, you need to be BETTER than everyone else – not just as good.
Posted by GenXpert at 11:59 AM 3 comments: 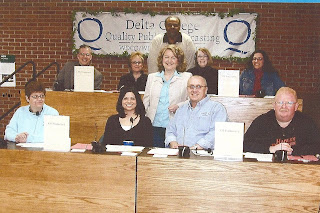 I was on air Wednesday night on Delta College Quality Public Television co-hosting the Winter Pledge Drive with Q-90.1 Programming Manager Howard Shaper. That's me in the center and Howard above me.

Why I need to retire early

I have been thinking about my preschool child recently and her ability to use the computer. My first grader also liked the computer from a time that she could barely talk - and couldn't use the potty at all. For both of them, once they learned to use the mouse, they were good-to-go and could learn just about any game on NickJr.com.

I, however, did not grow up with computer games, really. We had Atari, but only about 3 games (my Babyboomer parents really couldn't see the point in paying $20 for new games, but that's a whole other story). Our games, however, were not educational. Or if they were, they were not fun.

Fast forward 30 years and I am trying to learn database software. It's really not sinking in and I have to write all the directions down for any little thing I need to do. It's frustrating, because I'm used to things coming relatively easy for me.

I imagine that 20 years from now, when my kids enter the workforce, I will be a dinosaur. Because they can learn so much now from their computer games, there brains will just be hard-wired differently and they will be able to "get it" easier and quicker. Instead of facilitating seminars on what the future looks like for marketing - I will be conducting lectures for history buffs who are fascinating that there were people born before cable television existed.

I imagine that I will be the equivalent to today's grandma who keeps breaking the remote control and refuses to give up her rotary phone.

"Back in my day, we didn't have those fancy-shmancy video games. All we had were Barbies and Stars Wars figurines."
Posted by GenXpert at 8:14 AM 5 comments:

Gen Xers - it pays to be the small generation

A recent study from the Center for Retirement Research at Boston College argues that the size of "one’s birth cohort affects wages throughout one’s working life, with members of relatively large cohorts (at all stages of their careers) earning a significantly lower wage than members of smaller cohorts."

A lot of Gen Xers worry that we'll get passed over in the work world either by Boomers who stay in the workforce longer than previous generations or by Millenials who are nipping at our ankles as we climb the corporate ladder. However, this study says that the smaller the generation, the larger the wage. And Generation X is the smallest. Rock on Gen Xers!
Posted by GenXpert at 7:22 AM 1 comment: