The movies are at it again - are Gen Xers really possessed by the devil? 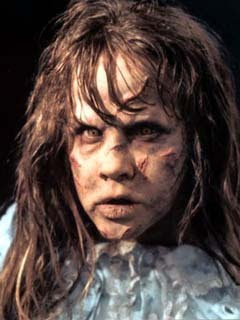 Okay, so when I do my presentations on Gen X, I usually like to include a part about how we've been dealing with an image problem since we were born. Basically, while the images of Boomers during their youth were wholesome, all-American kids like Gidget, Frankie, and Annette, Xers were portrayed as being possessed by the devil (Damien, Rosemary's Baby, Regan).
However, in 1984, a movie called Firestarter came out. It was the last of the child-as-demon genre. I argue it's because Gen Y was now around and therefore kids were "good" again.
Well, recently, I saw those trailers for that new movie called "The Orphan" and I thought, "OMG, they're going to do it to our kids - Gen Xers' kids also are going to be portrayed as demon-possessed."
But then I read the spoiler to this film. Here it is. I won't ruin it for you if you want to see the movie, but let's just say Generation X's demons apparently have not been exorcised yet.
Give us a break already, will you Hollywood?

Ah yes! The old Rosemary's Baby syndrome still alive and well in Hollywood. These movies are like cheap amuzement park thrill rides that leave you feeling a little sick after the ride. Generation X, I don't believe, is into these movies as much as movie producers would like us to believe. I like to think that we are seeking more sophisticated and poignant plots rather than those promoting the dark and horrible metaphors of our generation.

I'm really going to have to explain this, aren't I?

Here's the deal: Gen X got in the way of the Boomer - swinging - free drug use - Disco dancing - single free sex lifestyle. Having "demon child" movies helped them to justify leaving us at home as latch key kids and shuffling us off to grandparents or baby sitters.

Pregnancy and child rearing is also getting in the way of the Gen Y free sex party lifestyle. Please, take a moment and count the Xers:

Not too many, huh?

Penelope Trunk agrees, the Gen Y's are going to raise another Gen X:

So, here we go again. The Boomers have raised perfect little self centered copies of themselves, and since the Boomers run the movie studios these days, they're gleefully making the "demon child" movies to justify GenY leaving their unplanned offspring off with any relative or babysitter that's convenient.

The good news is there's going to be another generation of Xer types, and the way this country has been run under the Boomers, and by the sheer laziness that is the Y's, we're goign to need a group of tough, independent thinkers to carry on the GenX legacy that will eventually save the world.

-J and i would make great friends. hahaha!

Great post. I have a post going up tomorrow about gen X nostalgia. the child devil movies - not so nostalgic for.

And remember all the slasher movies where teens at camp, prom,etc were viciously hacked to death? These movies were very popular in the 1980s when a lot of us were in high school. Coincidence? Hmm....

Movies about this are always interesting.