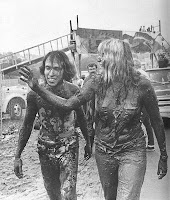 Chez Pazienza wrote what I would call an amusing attack on the Babyboomers recently that ran in The Huffington Post.

I say amusing, because it did make me laugh. It is fun to make fun of the hippies rolling around in the mud at Woodstock. But it also got me thinking about the attacks on Boomers that the anniversary of Woodstock has brought on, why they are really being written, and do Gen Xers really care about that anymore?

What I mean is that we have heard about Woodstock, Studio 54, whatever, blah blah blah, for our whole lives. By now, doesn't it go in one ear and out the other? Like when your grandma tells you stories about the depression - they were probably poignant at one time, but after the billionth time they become background noise.

What do you think? Do we care enough to write our pithy retorts?

I can't decide which reaction to Woodstock-talk I like more:

1. Saying "Wood-what? Never heard of it" (and watching the Boomer's jaws drop to the floor)

2. Screaming "GET OVER WOODSTOCK ALREADY, GAAAHHH!"

I sure don't care about Woodstock. I think that dead horse has been beaten more than it deserves. There are more important markers for the Boomer generation both past and present than for them and the media to continue to roll around in the mud together.

I'd love it if it just went in one ear and out the other--but instead, my reaction is, "Really? You're really never going to shut up about this?"

It's been background noise forever, for me. My parents weren't anything like hippies, never went to Woodstock or anything Woodstock-like (or if they did, they sure didn't tell me about it) and never even cared for the Beatles, so far as I know.

So, I've been spared the direct exposure, at least.

Honestly I've never known anyone who rambled-on about Woodstock, peace, love, the bomb &etc. I was raised by my paternal grandparents so my "background noise" was the obligatory "walked five miles to school in the snow, barefoot, because we couldn't afford shoes" rap. That and my grandfather's Dubya-Dubya Two stories. My erstwhile dad, when he decided to come around, was a beatnik, not a hippie.