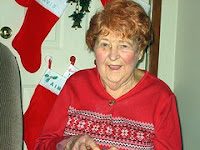 To my friends who knew her, if you have any memories of her, please feel free to share them.
Posted by GenXpert at 1:34 PM

Nice post honey. She always did appreciate all the work I do around the house :)

I loved auntie Helen! She'd prove that age is a state of mind and an ounce of candor could go a long way.

Never had the privilege of meeting her, but I knew her by reputation and what I knew, I loved.

We should all be so lucky to have such a special person in our lives.

What beautiful memories -- I know she gave you such joy. And I always love hearing stories about her.