At least your day's not this bad... 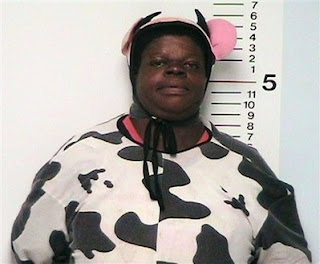 For any Monday morning grumps, I present Cowgirl.

The Associated Press is reporting that this undated mug shot released by the Middletown, Ohio, police department shows Michelle Allen, 32. Allen was arrested Sept. 27, 2008 after she allegedly impeded traffic, urinated on a neighbor's porch and chased children while wearing a cow suit, according to a Middletown police report.(AP Photo/Middletown Ohio Police department via Dayton Daily News)
Posted by GenXpert at 5:04 AM

You must have never spent a day at my workplace.
- GM

Poor thing! She is having a bad day!!! I think it's all the heat from wearing the cow suit.