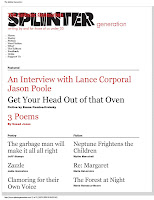 I heard from Millennial Editor Seth Fischer about his new site The Splinter Generation - featuring the works of writers under 35 (I just missed the cut off on that age range, by the way). I encourage you to take a look. Here's what he has to say about the site:

We are thrilled about the amazing writers - many new and several established -
who are a part of this project. We published Emma Komlos-Hrobsky, a twenty-two
year old fiction writer with a hilarious send-up of both our generation and our
parents' generation. We published Joshua Tung, a fifteen year old Singaporean boy who has written an astounding poem about 9/11. We published an interview with Lance Corporal Poole, who was injured in Iraq, thirty-two year old Anirban Acharya's poetry about cities, twenty-five year old Reuben Hayslett's essay
about loving a gay man in the military, and many, many others. Our writers are
diverse; they are gay, straight, black, white, wealthy, poor, and from every
corner of the country. But most importantly, they are outstanding voices of our
generation.